Mission aborted!
An early start at 06:03 am.  Around eight I arrived at the junction between the C-35 and the local road leading to the small picturesque town of Santa Maria de Palautordera.  Nearly stumbled into a Police patrol with lots of traffic cones and a cohort of civilians donning orange vests that identified them as Civil Defence members.
Nobody showed any real interest in a lonely cyclist so, taking full advantage of their indifference,  threaded my way through the wall of cones and started riding up the road. Shortly after, while passing by a fellow with the orange vest, heard a voice saying : "ride carefully, this road is closed because of an Iron Man event!"   Thanks, I replied, while mentally pondering my chances of being able to attach to my planned route.  Let's see.... by now it was shortly after eight and, as far as I know, Iron Man events start by swimming before jumping onto the bikes. There is no sea here (and it seemed to me a bit early for a bath) so... may be I'd be able to pass before they arrived. With those self-encouraging thoughts I inconspicuously rode by different members of the organization till a roundabout entering Santa Maria where I was stopped cold by Local Police. They politely but firmly informed me that the road was closed and that I wouldn't be able to reach the hamlet of Montseny since the Iron Man route ran through La Costa del Montseny (another most scenic ride) cutting off my way. After some delicate negotiations they seemed to take pity on me and showed me a route around town that lead to the nearby village of Sant Esteve de Palautordera. Arriving at Sant Esteve I found the next road block manned this time by Civil Defence members that allowed me to continue on the sidewalk while cautioning me about the incoming cyclists. By now my self confidence was growing, I had been able to overcome all the obstacles thrown in my pathway but... arriving in the last blockade a police woman stood firmly in the middle of the road. I displayed all my best persuading tricks to no avail, I was mercilessly driven back (staying there for a couple of hours till the road was reopened was obviously not an option).
So now... what?  Well, I had no option but aborting the mission and finding another target. Unfortunately I had no secondary targets in mind. While riding to Sant Celoni I decided to cycle again last Sunday's course and see if I could find any difference (for the better, of course!)
Once in Sant Celoni, while trying to get to the C-35 I was stopped again: a bunch of slender guys in thighs zoomed past. Those were the culprits of my misfortune! (I would most likely avoided them should that police woman had let me through...)
By now it was past nine, I had lost a lot of time wandering and negotiating with local "authorities" so I had to sketch a plan. I had no road map but I hoped to get to Anglès straightaway from Riudarenes avoiding my previous detour through local lanes. And the fact is that it worked! Once there I started the 24 km ascent to Sant Hilari. This time my water provision had been doubled and by no means was I going to repeat my hydration mistakes. The route to Mines d'Osor and from there to Osor is really easy (took a couple of pics from the hamlet of Osor). 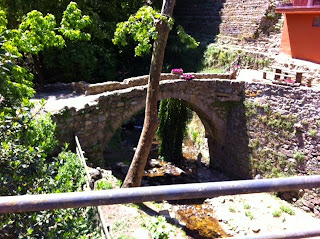 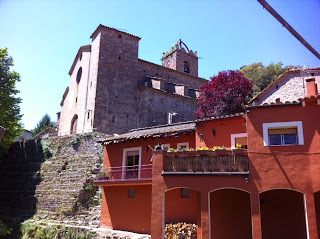 Exiting Osor the grade increases and the real climb starts. After some ten kilometres of huffing and puffing the grade easies considerably till one reaches Sant Hilari. 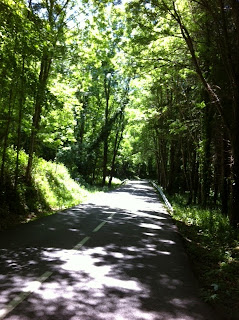 The return leg was uneventful; the main difference being that I was not bonking this time.
Got home in twelve and a half hours, same time as last week's but with two things to consider: a) I had lost nearly an hour in Sant Celoni and b) I was not feeling that bad.  On the other hand I'm still in doubt about my ability to endure a full Diagonal.
Posted by le cyclomuletier at 9:25 AM